Bryan Singer had this article in SciFiNow discussing the comparisons between Avengers and X-Men. And it surprised me how wrong he is about so many things.

First of all, Singer deserves a certain amount of credit for essentially creating the modern comic book film. That’s a post I’ve been meaning to write for ages and totally will. one day. soon.

Anyway, he obviously has some understanding of the franchise he basically built and its relevance in the comic book world; some sense of how to treat the properties and take the material seriously. It’s dwarfed by Kevin Feige, but it’s why I don’t understand this quote at all:

“We’re the bastard stepchild of the comic-book universe, you can go to my mom and she knows who Captain America is but you try and explain to her who Deadpool is? She doesn’t even know the Hulk – ‘You know, the Hulk! Green! Big guy!’”

The bastard stepchild of the comic book universe? Right, because it’s not actually one of the largest, best selling franchises in the comic book universe with I don’t even know how many spin offs and alternate storylines and… whatever (yes I haven’t read actual comic books since I was a kid so I don’t know the right words to put in this sentence).

The point is, you’ve got to be kidding me with any sort of “poor me” attitude about your franchise. It’s the freaking X-Men! If it lacks the pop culture impact of the Avengers, it’s because of choices you made.

Which, is actually the real point. He uses his mother’s awareness of Captain America as evidence. But you know what, the only reason his mom knows who Captain America is, is because they cast Chris Evans. And they made a good movie. I guarantee she had no idea who he was, probably even before The Avengers.

Thor? Kevin Feige even said in an interview that he hadn’t gotten this much attention since Adventures in Babysitting. But they cast Chris Hemsworth. That was half the battle right there. And then they also made a good movie.

Kevin Feige made intentional choices with the characters and franchises he had to work with. He cast the roles really well. He made sure good characters were the base of the films and built the action and the cgi up from there. He respected the overall property enough to fuse a consistent, coherent timeline.

He knew he was working with lesser known, less beloved characters and he had to earn the audience’s investment. 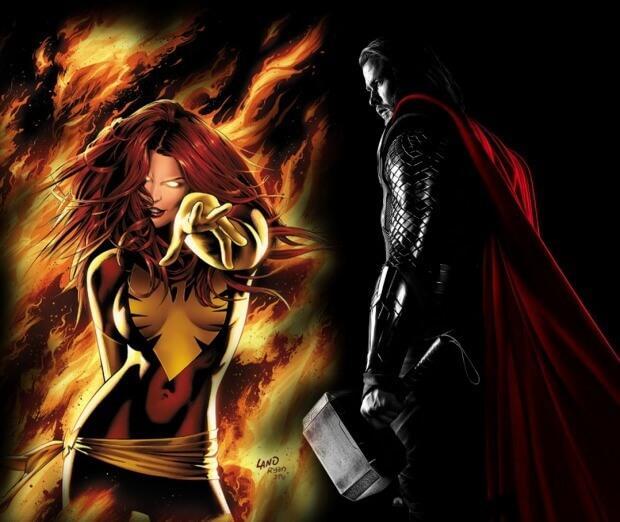 And he was right. At least for me. I LOVED the X-Men as a kid. I loved them in Spider-man and His Amazing Friends (which was one of my favorite shows ever as a kid). I loved Jean Grey in almost everything. I loved X-men Evolution. I even have Excalibur comics when Kitty Pride went off with Rachel Summers and joined Captain Briton.

You know what I didn’t love? The movies. I think Famke Janssen is very talented (her ST:TNG episode The Perfect Mate would be in my top 20 episodes). But she was so, so wrong for Jean Grey. And the way they handled the Dark Phoenix story elements? awful. And to cast her opposite James Marsden as Cyclops?! Such a bad idea.

“The Avengers is a mash-up of massive single character franchises of incredibly familiar characters and Iron Man. And did I mention Iron Man? Oh, and by the way – Iron Man.”

Let’s be honest, Iron Man had about as much popularity before the movie as Gambit. Maybe even less because I know a few people who really love Gambit. And now, Singer’s throwing him around as comic book currency as if that popularity wasn’t earned.

“If you want to give me Robert Downey Jr in a metal suit and have him join the X-Men, then yes, let’s go head-to-head [with Marvel Studios].”

But you know what, Singer was there first. If he’d wanted Robert Downey Jr. to be a part of the X-Men he could have cast him. The first X-Men movie completely changed the game of comic book movies. No one had handled them before the way he did. The field wasn’t littered with giant action films full of comic book heroes and villains. He could have done anything he wanted.

And Fox could have built an insanely popular and diverse film franchise on one of the most popular comic book properties.

But they didn’t. They made choices to be careless with their timeline and hapless with their casting. And now I have to ignore the movies in order to maintain the love I have for the X-Men characters.

The Avengers? I thought Iron Man was ok but not that interesting. Captain America was, I guess, pretty decent but I wasn’t quite sure where he belonged in time. Could not have cared less about all the others. But I love the movies. I love these characters because of the movies.

Pop cultural awareness doesn’t just happen, the way Singer seems to think. You make choices. You make movies and the way you handle these characters defines what people think of them; changes how they love them.

James McAvoy has a much better perspective on the whole thing.

4 responses to “the choices that make or break fandom”